A Q&A with cinematographer Frederick Elmes

In Jim Jarmusch's The Dead Don’t Die, zombies take over the small town of Centerville. When alarmed calls about missing livestock start coming into the local police station, the town’s three cops (Bill Murray, Adam Driver, and Chloë Sevigny) find themselves mired in a mystery that involves shifting weather patterns, mysterious animal behavior, and the dead coming back to life. With “the greatest zombie cast ever disassembled”—which includes Steve Buscemi, Danny Glover, Rosie Perez, Iggy Pop, RZA, Carol Kane, Selena Gomez, and Tom Waits—The Dead Don’t Die “conjures a giddy apocalypse with no way out,” exclaims The New Yorker. While inspired by George Romero’s 60s zombie classic Night of the Living Dead, Jarmusch and his team give the story a decidedly modern feel. To shoot the movie, Jarmusch turned to his longtime collaborator Frederick Elmes (with whom he created Broken Flowers and Paterson). Having previously shot David Lynch’s Blue Velvet and Ang Lee’s The Ice Storm, Elmes has proven himself a master of style and tone. "Fred is one of our greatest living cinematographers, extremely focused and innovative, with simple, beautiful ways of enhancing what appears on screen," says Jarmusch.

With The Dead Don’t Die, Elmes uses his decades of experience to bring an old genre back to life. We talk to him about his zombie inspirations, recreating the low-budget look of 60s horror, and what made The Dead Don’t Die so much fun to make.

Get tickets to see The Dead Don’t Die today.

The official trailer for The Dead Don't Die

How did you get involved in shooting The Dead Don’t Die?

As a cinematographer, when I find a director with whom I communicate well, see eye-to-eye, and have fun, I will pretty much follow him anywhere. On the last movie when Jim said, "I have a script about a bus driver who’s a poet who lives in Paterson, New Jersey," I was a little skeptical. But then I decided it would be fun to explore the poetry and we made Paterson. When he talked to me about The Dead Don't Die, of course, I was in. 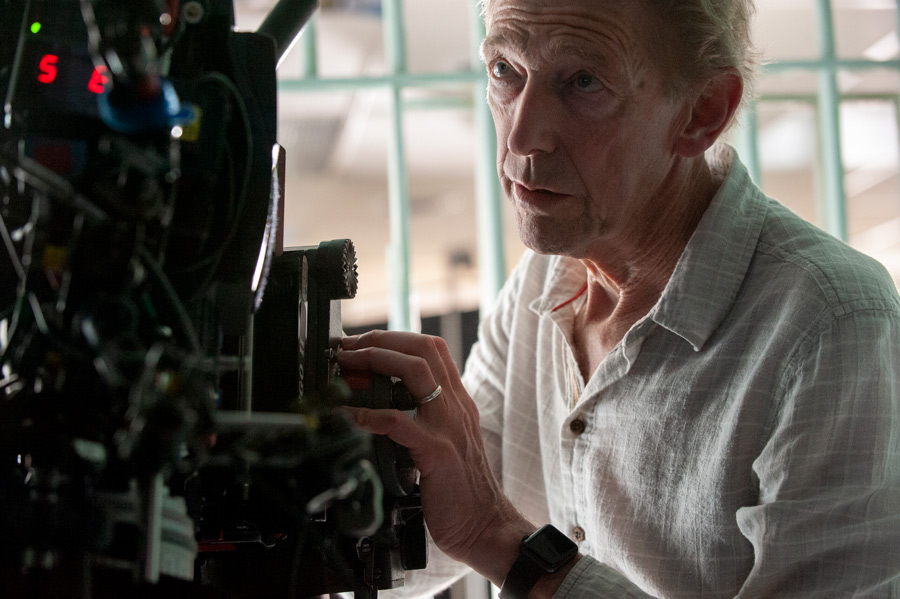 Cinematographer Frederick Elmes on the set of The Dead Don't Die

Did you have ideas going into it about how to shoot a zombie movie?

To be honest, I was not a big zombie film fan. Of course, I was familiar with the George Romero films. I remember seeing them when they came out, but I have not been following zombies much in the past few years. I was really counting on the fact that Jim would take it someplace interesting. He loves films of different genres and doing the homework to take them someplace new. When we started to come up with ideas, we talked a lot about Romero. We did our best to pay homage to someone whom we both really respect as a filmmaker. But we also did it our way.

What kind of films did you watch for homework?

We watched lots of the George Romero films, especially Night of the Living Dead. We started collecting images that felt like part of the world of our zombie film. They were not necessarily from Romero films. Sometimes they would include zombies and sometimes pictures of odd clouds or weird weather, things that would fit a story where the world is tilting upside down and things are going wrong because of us humans. These images were effective as touchstones, not as things to imitate. We could return to them to remind ourselves about the mood we wanted. Even after we started principal photography, we gathered images—odd weather patterns, a strange light in the trees, a storm starting up. We collected them to use later for visual effects.

When you started work on The Dead Don’t Die, was there a specific creative challenge for you?

There is a creative challenge in every story and that makes it interesting for me. I often feel that I need to tie my hands in some way or try something new to give the film a different twist. In most films, I am careful to choose lenses and optics that all match pretty well. For this film, I chose to use optics that were mismatched, that flared in interesting and odd ways. And if they didn't flare enough, we added something that made them flare even more. Nothing quite fit.

You also chose to shoot the film day for night?

Yes. This is not a big budget film, but there are a lot of zombie scenes that take place at night. To light the areas in which all the zombie conflict occurs could have been challenging for our budget and schedule. When Jim and I spoke, this stumbling block proved to be a bit of inspiration. We both came upon the idea of shooting day for night. In early zombie films that were made on a shoestring budget, filmmakers would often shoot night scenes during the day to save time and money. As a technique, it has a particular look, one that is a staple of many B movies. We decided this was worth exploring. I did some tests and we found a way to make day-for-night shooting work for us. The bonus is that we are getting this interesting visual style as well. 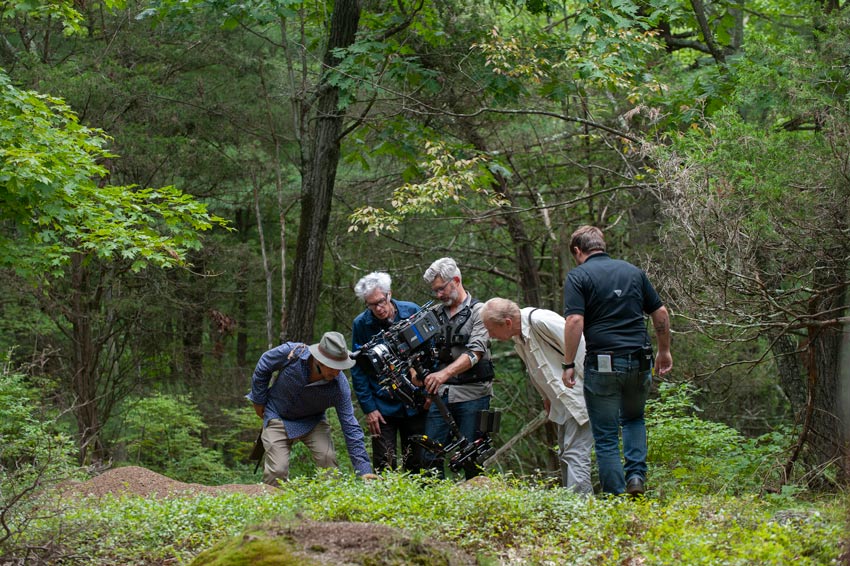 Jim Jarmusch, Frederick Elmes, and others prepare to shoot zombies on the set of The Dead Don't Die.

It did work out that way. We both love the Romero films and they served as a great touchstone for creating the style for this film.

Can you talk about other stylistic choices you made?

Of course, there has to be some gore and blood, especially during the first encounters with the zombies. But after that, we decided to make them dry zombies. When our heroes have to kill the zombies, they aren't bloody anymore. There's just black powder that comes out when their heads are chopped off. I think that is a nice twist on the zombie tradition. We worked with an effects company called Chimney to achieve that look.

The film has so many great actors who seem to be having a great time with the story. What was the production like?

Really fun. We really did have a good time. Visual effects can be really difficult to work with, but we all knew that we were making a comedy with Jim’s sensibility and sense of humor. The people doing the special effects and prosthetics makeup did such a wonderful job. It was just so much fun to be around them.

Sign up for the Focus Insider newsletter to be first in line for free advance screenings, world premiere travel packages, weekend set visits, and so much more!